TO MY PARTNERS in MINISTRY to the PEOPLE of HAITI

Once again I find myself with an ache in my gut as I enter the General Hospital in LesCayes. This time it is for the newest little guy at the orphanage. Yesterday, Ched had invented himself a swing of sorts from an old mosquito net. It was not surprising that Ched had made yet another invention. For a little 4 year old, he has amazing handyman skills, developed by following his handyman father around when he had no mother to care for him and no choice but to be with his papa. He knows his tools. He knows when a hammer is needed, when a screwdriver is needed and what to do with a nail. This time, however, his invention resulted in a fall and a nasty break of his left leg. 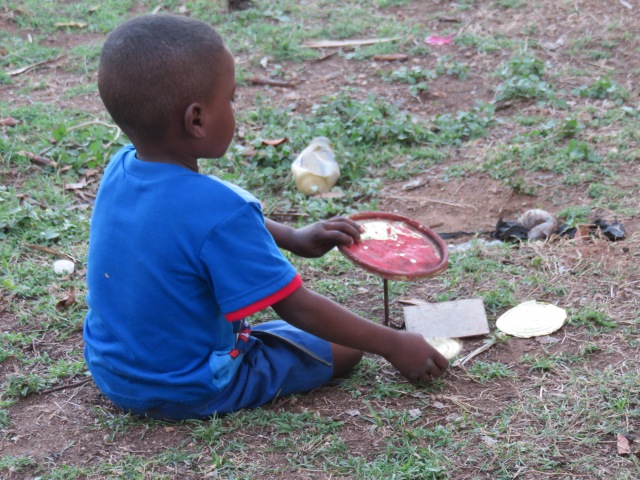 Ched with one of his recent “inventions”

He was injured on Thursday and after having a sleepless, painful night it became clear that the orphanage staff would need to take him on Friday on a boat for treatment only available on the mainland. Most likely he took a 20-minute motorcycle ride over a severely rutted road to reach the wharf where the water taxi would make the hour-long voyage to the mainland. Ched arrived at the hospital early in the morning. His x-rays revealed a diagonal break of his left leg from hip nearly to the knee and the need for a cast. It was not until late morning, however, before a doctor was available to perform the task.

I have seen this same room not too long ago (see Communiqué #120) when I brought another boy from Île-à-Vache for an orthopedic issue. The room was not any more sanitary. The affected skin area was not cleansed. The equipment was the same antique pieces that I had seen before. A strong doctor pulled hard on Ched’s leg in an attempt to align the broken bone, as traction equipment is only a dream. It was then that little Ched cried out “Manmi Nora!” as if to say “Please rescue me!” As we watched our little guy writhe in pain, I wiped the tears that were flowing from his eye down into his ear. He was smothered in sweat and pleading to be able to sit up. His cast would end up engulfing his tummy and both of his legs with a crude board between his legs to keep him immobile. It breaks my heart to know that for at least the next four weeks, he will not be able to stand, walk or sit. Such an active little guy will certainly not understand why he has to remain so still. 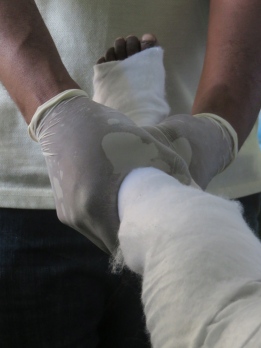 My prayer now is that his leg will heal properly and he will one day soon be able to be the active, curious, inventive boy that I have come to love.

This event also reminds me (yet again) what a great need there is for a hospital on Île-à-Vache. Today, as the doctor was setting Ched’s leg he mentioned that the little patient just before Ched was also a boy from Île-à-Vache. He had broken his arm and had to make a similar boat ride to the mainland to receive care.

Please join me in praying for the complete recovery of Ched and for the medical facility that is SO badly needed on Île-à-Vache! Our great God can do the impossible. You can be a part of helping to more adequately care for the medical needs of the people of this little isle!

Missionary to Haiti & the Dominican Republic          Until next time, God willing …

Executive Director for Caribbean Children's Foundation Missionary to HAITI and the DOMINICAN REPUBLIC
View all posts by Nora Léon →
This entry was posted in Uncategorized. Bookmark the permalink.